I’m loving the assonance of these post titles the long oh sounds in golden and globes, combined with lowdown. Golden Globe Lowdown. Golden Globe Moments.  You can’t understand how tempting it is to combine the words into Golden Glowdown or Golden Glowments- but this is the last post and I’ve successfully resisted the urge throughout the entire trilogy.

I’m liking the loosely superlative style of the past two posts, so I’m going to stick with the patten for this one.  If you don’t like it I promise the next post will be a change of pace 🙂

Biggest Winners:  La La Land and Moonlight
I haven’t seen either of these movies so this is going to stay short and sweet.  Moonlight beat Manchester by the Sea (haven’t seen that either, oops) for Best Motion Picture (Drama).  And La La land one a bunch of awards, beating some record or other. What does this mean in terms of the Oscars- well, the Oscars doesn’t have a separate Musical/Comedy category (and there isn’t usually a strong Musical/Comedy contender for the big awards)- so call this a toss up.  And, you know, don’t count out Manchester (for which Casey Affleck won Best Actor (Drama).
But La La Land was nominated for every award it fairly could be, and won all of them. Now, I haven’t seen it, but I doubt that it was that good. I would have preferred to see more diversity in the winning films.

Also I don’t watch television (I’m a film girl), so this is going to go light on the television awards and happenings.

Worst Host: Jimmy Fallon
Errmmm, so Jimmy Fallon was the only host, but I found him closer to the worst host than the best host. It’s like that philosopher who said for their to be a table their must be the ideal table and the non-table. We had the non-host, I think.  And there was an ideal host somewhere else.
But maybe take this with a salt pile for all this winter snow.  Not just a grain of salt. A salt pile.  Because I don’t really like Jimmy Fallon.  His opening was high-budget and based pretty entirely on La La Land to the exclusion of all other films except for little nods. It just wasn’t that funny except for the part where they mentioned having black people (but more on that and my new favorite movie, Hidden Fences, later). But I feel bad for Jimmy Kimmel (who I dislike less, but still don’t like because of his feud with Matt Damon and the trauma he has caused to children nationwide with his stolen Halloween candy segment). But the bar for expensive yet vapid has been set high for Kimmel. (Also, white kids rapping isn’t funny. It’s sad. Stop.)
And, you know, he made a bunch of Trump jokes.  Which was the easiest way to go for humor, but really doesn’t sit well given Jimmy Fallon’s… comfortable relationship with Trump over this election season.  So, you know, Fallon’s a mercenary who will take a cheap shot for a laugh. What else is new?
Maybe I’m just missing Ricky Gervais, who remind me of a favorite university Chemistry professor.

Speaking of Matt Damon:
“Matt Damon – of course we all know Matt Damon from his greatest role yet: telling Ben Affleck that he liked Batman v Superman.”
Touche, Jimmy Fallon, touche.  That may have been the only time I laughed?

Overrated Presenters:
Don’t hate me, but Kristen Wiig and Steve Carell. You can see it here.
Amy Schumer and Goldie Hawn’s bit wasn’t actually very amusing either, but I don’t generally find Amy Schumer’s sense of comedy (or values/morals) to align with mine, so no surprise there.
Sofia Vergara’s hosting bit was entirely about how, because she’s latinx, she’s illiterate. Girl, don’t play yourself down like that! I understand being able to laugh at yourself, but that doesn’t work when the joke isn’t funny.

Best Trump Joke:
Hugh Laurie. He’s British and sardonic so it’s all good. Hugh Laurie can’t be cheap (did you see his plaid suit?)
“I suppose I’ll be able to say I won this at the last ever Golden Globes. I don’t mean to be gloomy, it’s just that it has the words ‘Hollywood’, ‘foreign’ and ‘press’ in the title.  I think some Republicans even have a problem with ‘association’.”

Least Overrated Actress of the Evening (Despite Claims to the Contrary):
Meryl Streep received a lifetime achievement award and promptly used her stage time to discuss our political climate and exhort her colleagues in Hollywood as well as the press to use their power for good, and to hold the government of the US accountable.  I have my own complaints about her speech, but The Donald’s tweet the next day about her being an underrated actor is the most ridiculous because… Meryl. Has he ever seen a movie?
Politics aside, say what you will about her speech- Meryl is one of the most powerful and talented actresses of our time/all time. As a recipient of a lifetime achievement award, she’s definitely earned the right to address the crowd with her piece for a few minutes (Politics not aside: Well done, Meryl).
Extra feelings for referencing Carrie Fisher.

Best Acceptance Speeches:
Ryan Gosling for La La Land: Gosling’s speech was lovely, heartfelt, and not too long.  He tenderly thanked his wife and dedicated the award to his late brother-in-law.
Tracee Ellis Ross for Black-ish:  “This is for all the women, women of color, and colorful people whose stories, ideas, thoughts are not always considered worthy and valid and important. It is an honor … to show the magic and the beauty and the sameness of a story and stories that are outside where the industry usually looks.”  And she looked so happy with her award 🙂 It’s excellent to see someone drop the false modesty and just be honestly tickled to win.

Runner Up: The director of Elle: The French are something both special and else.  This was a cute acceptance speech and his heartfelt thanks of Huppert was charming (and she was so appreciative from the audience!)

Underrated Moment:
Viola Davis’s introduction of Meryl’s lifetime achievement award has been reasonably overshadowed by Meryl’s speech, but it was beautiful and very very powerful.  In addition to her Globe for Fences, she should have gotten another for this monologue.

Best Kiss:
The Andrew Garfield – Ryan Reynolds surprise smooch has touched off so much Spideypool fan art.  Even when Reynolds loses to the other (lesser?) Ryan, he still has something funny up his sleeve. Is he not actually Deadpool? Good on the two of them for planning this moment.

Hardest Choice:
Best Animated Film between Zootopia, Kubo, and Moana? I felt like I was being drawn and trisected.  Zootopia won, by the way.
And Best Original Song between City of Stars and How Far I’ll Go. I have both on my iPod at this point even though I’ve only seen Moana.  But I thought How Far I’ll Go should have won.  In part because I like that other song (it has the word fire in the title?) from La La Land better.

Best Memories:
The tribute to the work of Carrie Fisher and Debbie Reynolds, both recently deceased, was a kind and sincere few minutes. The short memorial featured candid home movies along with clips from some of Reynolds and Fisher’s filmography, including Singin’ In the Rain and Star Wars, both favorites of mine. The whole thing was soundtracked by the pair singing “You Made Me Love You (I Didn’t Want to Do It)” from a 2011 appearance on The Oprah Winfrey Show.
Be right back, going to go hug my Mom.

But Some Forgotten:
In a year that saw a huge spate of celebrity deaths, I was kid of surprised there was no other In Memoriam segment for everybody else.  Gene Wilder and Alan Rickman, among many others. 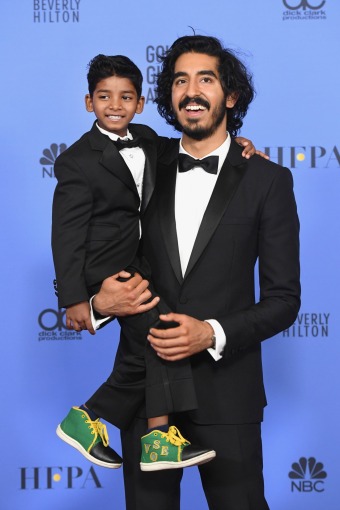 Best Duo:
Dev Patel and Sunny Pawar, who both act in Lion, took the stage together and Sunny is the most adorable thing ever.

Cringiest Acceptance Speech:
Tom Hiddleston describing how The Night Manager improved the lives of those in South Sudan. He has since apologized, saying he was nervous and things came out wrong in the moment. Two thoughts: 1) Sounds reasonable. 2) I certainly hope so.

Least Excusable Gaffe/Least Buzzed Movie:
That’s right, it’s Hidden Fences!  No, you’re not wrong- Hidden Fences isn’t a movie. It’s a combination of the movies Hidden Figures and Fences, an honest mistake.  Except I  feel like we all know why it was those two films that got confused (Hint: They are the two films (plus Moonlight) with African American stars/focusing on the African American experience).  Hidden Fences came up at least twice, once by presenter Michael Keaton and another time by Jenna Bush Hager on the Red Carpet.

Oops moments:
Emma Stone happened to hug La La Land director at the same time that he and his wife went for a kiss.  Celebrities, like us, sometimes they fail at hugs.
Tom Hiddleston was unintentionally denied a handshake by his Night Manager co-star Hugh Laurie (or maybe intentionally after that irritating acceptance speech?)
John Legend aka John Ledgend’s name tag was spelled wrong.