Candles. Let’s talk about them.  Right now Lily and I have some Bath and Body Works Pumpkin Waffle something or other in our common room because it helps counter the cat smell of tuna feast in gravy. There are many benefits to having a cat in the suite- the lowtide aroma is not one of them).

I had the candle in my closet going on four years and I’ve finally given in to seeming *basic* (the combination of Bath and Body Works and pumpkin waffle- just buy me a pair of UGGs now and put me out of my misery) in the interest of avoiding having to throw open the windows in the raw New England winter to clear the air so often.
And truth be told, it’s not a bad smell by any means. Gourmand aromas are popular for candles and it’s easy to understand why- they’re delicious, homey, and comforting.

I also have my Christmas gift Thymes Frasier Fir candle in my desk and every time I open the drawer I’m deluged by the scent of pine.

And I already mentioned how Mom loves her Cire Trudons (and I get to love them second hand when I’m at home- because she is very possessive and won’t let me touch them!).   I started her with Ernesto (pretty much Ernest Hemingway trapped in wax (that sounds much creepier than I meant it to (is that why it’s called Ernesto?))). And then Carmelite, which is a cool and pensive incense, moss, and mass, and her most recent is Ottoman, a spicy smoky rosy leather we bought at the brand’s store in Paris (the salesperson was very kind!)

And if I were getting my own Cire Trudon? Well, I would want to give them all another smell, but I have a tenderness for Cyrnos (surprise surprise that I like the herby garage scent), Josephine (all your classic perfume flowers- rose, jasmine, and iris)(Why do they list camellia when it doesn’t have a scent?), Madeleine (a floral leather inspired by an accomplished fencer and equestrienne- yes please!), and Proletaire (lily of the valley, it gets me every time. Also, a candle named for the proletariat- only the French!).

D.S. and Durga used to be sold in a vintage store in Cambridge, but then they stopped being carried and the vintage store became less vintage more rich Cambridge Square hipster, and this is why we can’t have nice things.  But besides some nice fragrances (that I haven’t tried in years because they’re no longer carried in Cambridge), D.S. and Durga has a candle called Portable Fireplace, and as a permanently freezing person, it sounds to tempting even if I know it would do nothing for my body temperature. Who doesn’t love the smell of a wood fire?!  “To make it smell like you have a fireplace, especially when you don’t have a fireplace,” or when you’re at Yale and you have a fireplace in very room but they’re ALL BLOCKED UP.

And I mentioned Homesick Candles in a previous post, but I’m still so tickled that the scent of Dunkin Donuts coffee and apple cider donuts has been bestowed on my beloved home state of Massachusetts. Have you ever had an apple cider donuts? I’ve had less than ten in my life I think but they’re glorious. And when I first found this site I looked at the notes in all of the candles and it made me so happy. Such a delightful concept.  Like Pennsylvania?- Chocolate and Molasses. Yum. Or Virginia?- Honeysuckle and hints of the forest floor… 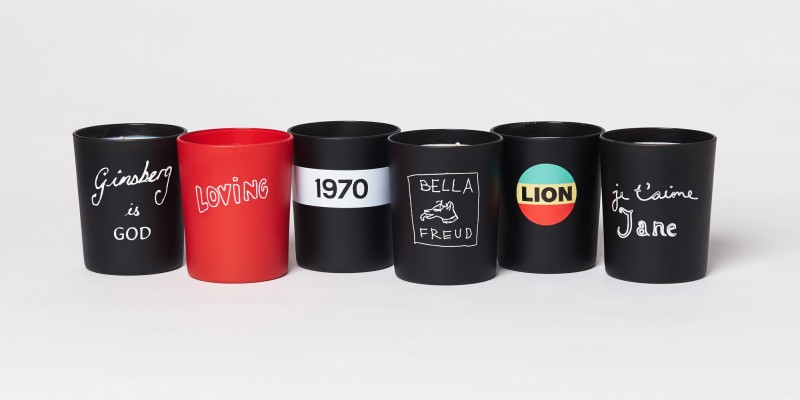 I don’t quite understand Bella Freud– she designs clothes but also candles? I’ve never tried either, but it’s a funny niche combination.  But I suppose if I followed all of my in a mercantile fashion there would be a store full of perfume, films, books (baby name books and otherwise), and yes, clothes and candles. Besides, both the clothes and the candles are pretty nice, so there will be no stones cast from this quarter.
But I may be unduly (positively) influenced by the packaging- I love the typeface.  Most appealing to me- 1970 (which sadly lacks the typeface but has a scent of musk, patchouli, and incense that I can only imagine would be lovely- it sounds like one of my most “me” fragrances, l’Air de Rien.)

Which inspired me to google and OH MY GOD MILLER HARRIS DOES MAKE A L’AIR DE RIEN SCENTED CANDLE. I’m screaming with joy. Just kidding, I’m in a library and my face is set in my perennial resting bitch face.  “Challenging the conventional, Jane sought to evoke the nostalgia of dusty libraries and old books. Lyn masterfully conjures this essence with rich notes of oak moss, Tunisian neroli, sweet musk, amber and vanilla. As indefinable as it is alluring, l’Air de Rien captures the essence of Jane’s inimitable style.” Oh right, this scent was personally commissioned by Jane Birkin (and they don’t mention it, but she asked for the scent of forgotten places and her brother’s scalp- maybe that’s not a good selling point? 😉 )

All the Diptyques. Well, maybe not all, but most.  This brand is most famous as a candlemaker but I’ve mostly interacted with it in the perfume realm. Diptyque’s figgy Philosykos has been a summertime (year-round) staple for me for years, since I bought it at Scent Bar in LA.  Their candles are fairly simple- focused on one note, and I’ve sniffed them dry when I’ve been out sampling perfume but have never smelled one burning.  Greatest appeal?: Figuier (because I trust Diptyque to make a good fig), Foin Coupe (Fresh cut hay! One of my favorite smells and so notoriously hard to get right- is it too good to be true?), Feu de Bois (everyone loves a wood fire), and, in their other lines, John Galliano (all wild dried herbs and Russian leather and musk) and Madeleine (inspired by the immemorial nostalgia of a Mr. Proust- but I have my own happy madeleine memories.)

Candles! They’re pretty and they smell good! What’s not to like?