Tomorrow is Oscars day! Very excited to see who wins what (now that I’ve finally caught up on ALL of the big movies) and of course, who wears what.  After being inspired by both Man Repeller and Harper’s Bazaar, and perhaps a little bit by the foofaraw (be right back, adding that to my next ‘Words’ post) re: Meryl Streep and Karl Lagerfeld, I decided to free my imagination (within the narrow overlap of Oscar-nominated actresses/actresses in Oscar-nominated films and the collections shown at 2017 couture week.  Hope fully it doesn’t come too much across that I have vast preferences for some couture shows over others (because I could get another list out of that!), because I tried to be very even-keel and non-personal in my recommendations. I wanted to do this like a professional.
So, if I were *stylist to the stars*, what would they be wearing? Well, it would definitely be a more exciting Red Carpet showing 😉

Meryl Streep, actress in Florence Foster Jenkins, Elie Saab
So Meryl Streep shouldn’t win, but what she should do is have a balls to the wall night of crazy partying, wake up in her awards show clothes and borrowed diamonds, and take Donald Trump to court after a steaming plate of pancakes! (All’s fair in my imagination!) I need something grand dame but also fun-loving, something Auntie Mame. Wear the above, Miss Meryl! I will accept no substitutes! Accept maybe this. But really, if you lay into Donald Trump again you can wear whatever you want and I will be appeased. 🙂
But really this is just too perfect, it even fits in with the Florence Foster Jenkins vibes. Maybe Elie Saab will pay her to wear it.

Viola Davis, actress in Fences, Armani Prive
Viola Davis sticks to impactful colors in classic silhouettes, so I think this goldenrod skirt with a contrasting black top would look absolutely stunning on her. Truthfully, this is one look I’m less sure about. I think Viola looks best in more streamlined cuts and it’s surprisingly difficult to find streamlined cuts in couture. Everything is so froofy and embellished these days. So if Viola doesn’t want to do the couture thing, I would be in full support of her getting something nice and sleek from Michael Kors, who does well by her.

Octavia Spencer, actress in Hidden Figures, Elie Saab or Giambattista Valli
So I did this completely out of order. This is the one that I’m writing second, having started with Jangle Monae’s (below).  And jesus it’s so hard to choose now that I’ve removed the black/white color rule.  I’m narrowing Octavia’s dress down from a selection of eleven that I’ve culled from the couture runways!  Tadashi Shoji used to be her go-to, and I feel like this would be be lovely on her, but I feel like it lacks drama for the Oscars, particularly given that she’s a nominee in a nominated film!  She tends to prefer structured gowns that define her waist, but she’s also opted for pantsuits quite a bit lately, so that opens whole new vistas of exploration and outfit-picking.  I ended up narrowing it down to one pantsuit option (Elie Saab) and on gown option (Giambattista Valli). And then opt to have the pantsuit given cap sleeves, because I don’t think I’ve ever seen her go sleeveless on the Red Carpet.  I think the colors would be glorious on her and I think both designs are stately af.

Janelle Monae, actress in Hidden Figures and Moonlight, Zuhair Murad or Ralph and Russo
I want so much for Janelle Monae to BRING THE DRAMA! So Miss Janelle is known for sticking to a very rigid black and white color palette on the Red Carpet (very rarely she’ll go all black or all white) but does so much experimentation in terms of texture, graphic prints, and volume.  I think the Zuhair Murad on the left would just be so beyond fabulous on her while still being the kind of thing she very much tends to wear- just upped a notch.
But then… because she went all black pretty recently, I’m almost holding my breath for her to come out in all white like some beautiful angel- in which case I think the Ralph and Russo gown on the right would be absolutely stupendous.  Sighing at the beauty of the images in my imagination. And if you think it’s over the top, just thank your lucky stars because I could have picked this one 😉

Taraji P. Henson, actress in Hidden Figures, Elie Saab
Taraji wore a gown at the SAG awards and I loved the frothy yet embellished look on her.  I feel like this Elie Saab does the same thing but better.  And the gold would really glow against her skin. Just so long as she fixes the terrible runway styling and gets it lined! It would be super elegant. Just please no sunglasses and headband. So gimmicky. I really appreciate that Taraji really goes for it when it comes to her public appearances. Looking forward to see what she wears this weekend (if I can’t be in charge)!

Nicole Kidman, actress in Lion, Zuhair Murad
Nicole Kidman always looks her best in dark and dramatic dresses (in my professional and expert opinion), which is why I think this firework of a dress from Zuhair Murad would sing on her. I don’t think Lion will win much in the way of awards this weekend, but Nicole Kidman should take the opportunity to look gorgeous and happy and have a great time. In this Zuhair Murad. And there are these two Zuhair Murad dresses, but I don’t like them as much.

Ruth Negga, actress in Loving, Dior
Ruth, please wear this! It’s such an interesting dress and you’re a dress-wearer extraordinaire, and I want to see it on a non-model human being, on a Red Carpet. Please be my quilted red satin thing!  But if you want to go the froofy route, there’s this nice pink thing. I think it’s blush color would glow on you.
Honestly, Ruth Negga will probably go the route of a customized gown, potentially from Louis Vuitton (GAH). But I want someone (her) to wear this scarlet pincushion. 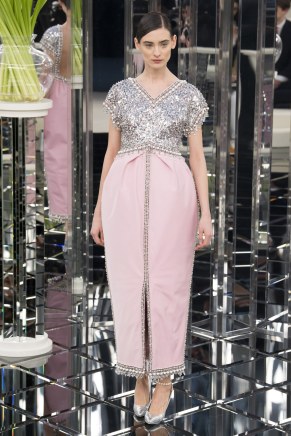 Naomie Harris, actress in Moonlight, Chanel
I wasn’t that taken by Naomie’s performance in Moonlight, but I do appreciate her willingness to push boundaries when it comes to her style choices. This Chanel has a funny silhouette that I think Namoie Harris would at least be brave enough to experiment with, and probably carry off really well.  This funky thing has a similar (similarly odd) shape, but I prefer the pink to the mint (as well as the interesting bodice of the one above).  But then part of me wants to suggest this, which is a completely different tack- a more romantic and floral one, courtesy of Valli.

Amy Adams, actress in Arrival and Nocturnal Animals, Ralph and Russo
Amy Adams frustrates me by always wearing black sheath dresses. Or navy. Or dark green. It’s a very distinct preference that honestly I feel like qualifies as a rut. If I were walking carpets and starring in movies like Amy Adams, I would be wearing the craziest things!  So here is what I think: this Ralph and Russo dress is the sheath-type shape that she is unwilling to be separated from. It’s also not a crazy color. It’s just silver.  But the texture is super interesting.  And the hardness fits with her character in Nocturnal Animals! And the sci fi feeling fits with Arrival! It’s a match made in heaven- do it Amy! 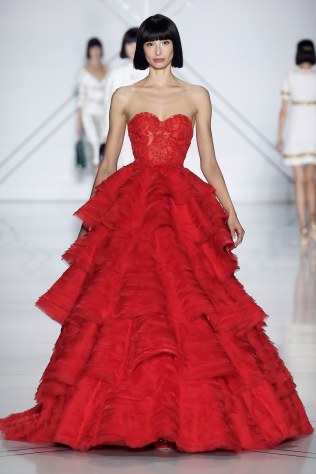 Emma Stone, actress in La La Land, Ralph and Russo
I’ve talked already about my issues with La La Land, but I’ll graciously allow that it is a beautiful beautiful movie and likely to win many many awards.  And Emma Stone has been pulling out all of the stops with her Red Carpet appearances leaving up to the Oscars.  I feel like she must be planning to wear something really amazing to top everything that she’s worn already this award cycle.  And I can’t really imagine more of a showstopper than this fire engine red tiered Ralph and Russo gown.

Michelle Williams, actress in Manchester by the Sea, Dior
The nice thing is also the sad thing: poor Michelle Williams is currently indentured to Louis Vuitton and seems to be contractually obligated to wear whatever horror they ask her to on the Red Carpet.  In the past her style leaned kind of twee but she seems to have moved on from that without really finding a replacement. So now she’s wandering like a lost soul in a maze of Louis Vuitton.  I want to suggest for her consideration this Dior, as the first step in her new style direction ‘pagan woodland fairy’.  Really! She’s very petite, very platinum blond pixie-cut, I think it would be an excellent match.  Better than whatever Louis Vuitton is going to put her in, just wait and see.

Natalie Portman, actress in Jackie, Ralph and Russo
Ironically, I almost picked the Dior gown she wore to the SAG awards a few weeks ago. No big surprise, as I know I had seen pictures of her wearing it and because she’s a face of Dior, the association must already have been built in my mind.  So obviously the main goal here is ~pregnancy style~ which is so exciting because 1) BABIES! and 2) limitations on the vast world of pickable couture gowns.  I mean, it pretty much rules out all of the Chanels (so many belts!).  There’s this gorgeous and bright Schiaparelli, but I think it’s a bit too showy for Natalie, who tends to stay with a more subtle and ladylike elegance, and probably will even more so at the Oscars because of the subject matter of the film she’s up for.  So putting aside this and this, I have a clear winner. The beautiful, gauzy but serious gown by Ralph and Russo you see above. 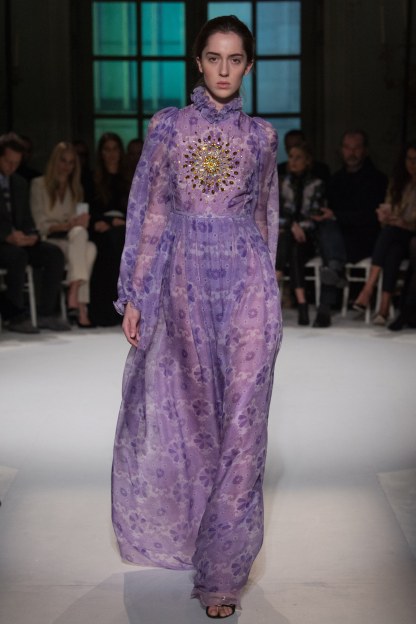 Isabelle Huppert, actress in Elle, Valentino or Giambattista Valli
Ahh, Isabelle Huppert is such a gorgeous woman but maybe I’m only in love with her because I’m in love with her movie and because she’s French? I haven’t gotten much of a read on her Red Carpet style (I feel like a celebrity palm reader!) but she seems to like classic and columnar type lines with only the smallest bit of flair. So I chose the two above- this year’s Valentino couture runway seems almost made for her in its muted colors and flow silhouettes, but the purple floral Valli seems like it would fit the adventurous side she shows every so often (and if not the Oscars, then when?!)

They should pay me to do this 😉
And then when the actresses weren’t there I would try on the clothes myself and make faces in the mirror.